Ikats is everywhere these days — as trendy as anything ancient can ever claim to be. Visible in traditional textiles ranging from Southeast Asia to South America to the Middle East and beyond, this type of pattern now lends interiors a kind of dressed-up bohemian vibe. But what is it, and where did it come from?
Think about a typical patterned textile, say a floral upholstery fabric. When you think about how that pattern is created, you probably picture some sort of printing scenario, where designs are basically stamped onto a piece of blank fabric using dyes or paints, right? That is how block-printed cotton fabrics and toile’s and many other kinds of surface-patterned textiles are made. With ikats, though, the threads are dyed before they are woven into textiles. Let me explain.
The word ‘ikats’ (pronounced ‘ee-KAHT’) comes from the Malaysian word ‘mengikat,’ or ‘to tie,’ because the loose threads are tied into bundles using grasses or wax-treated cotton to specify where the dye is able to sink in and color the thread (basically a refined type of tie-dye). What this means is that the weaver has to figure out where on the loose threads the dye should (and shouldn’t) go in order for it to form the proper pattern when it is woven on the loom. It gets more complicated as you add more colors. Some ikats are made by dyeing the warp threads (the fixed threads that are attached to the loom), some by dyeing the weft threads (the threads that are actually woven in and out of the warp threads), and some by dyeing both, a technique known as double ikat

kat, or Ikkat, is a dyeing technique used to pattern textiles that employs a resist dyeing process similar to tie-dye on either the warp orweft fibres.
Bindings, which resist dye penetration, are applied to the threads in the desired patterns and the threads are dyed. Alteration of the bindings and the dyeing of more than one color produce elaborate, multicolored patterns. When all of the dyeing is finished the bindings are removed and the threads are ready to be woven into cloth.
The defining characteristic of ikat is the dyeing of patterns, by means of bindings, into the threads before cloth construction, the weaving of the fabric, takes place. Herein lies the difference between ikat and tie-dye. In tie-dye the fabric is woven first and the resist bindings are then applied to the fabric which is dyed.
In warp ikat the patterns are clearly visible in the warp threads on the loom even before the plain colored weft is introduced to produce the fabric. In weft ikat it is the weaving or weft thread that carries the dyed patterns which only appear as the weaving proceeds. In weft ikat the weaving proceeds much slower than in warp ikat as the passes of the weft must be carefully adjusted to maintain the clarity of the patterns.
Double Ikat is where both warp and the weft are resist-dyed prior to stringing on the loom. Traditionally, and still commonly, a back-strap loom is used, though any variant or modern loom may be used.

Ikat is an Indonesian language word, which depending on context, can be the nouns: cord, thread, knot and the finished ikat fabric as well as the verbs “to tie” or “to bind”. It has a direct etymological relation to Javanese language of the same word. Thus, the name of the finished ikat woven fabric originates from the tali (threads, ropes) being ikat (tied, bound, knotted) before they are being put in celupan(dyed by way of dipping), then berjalin (woven, intertwined) resulting in a berjalin ikat- reduced to ikat.
Rouffaer is attributed to introducing the term ikat into European language.[1] Ikat is now a generic English loan-word to describe either or both the process and the cloth itself- wherever and however the fabric may be woven or stylized through ethnic or the weaver’s motives.
Linguistically, strictly speaking: the plural of ikat in Indonesian remains ikat. However, in English the Saxon suffix plural (‘s’) is commonly affixed, as in ikats and similarly in other languages. All are correct, though for orthography, this article favours the original Indonesian.

The history of ikat
As woven fabric rarely survives for more than a few centuries it is extremely difficult, if not impossible, to determine where the technique of ikat originated. It probably developed in several different locations independently. Ikat was known to be produced in several pre-Columbian Central and South American cultures.
Uyghurs call it atlas (in IPA [ɛtlɛs]), and it is used only for woman’s clothing. It is recorded that there were 27 types of etles during Qing occupation. Now there are only 4 types of Uyghur atlas remaining, namely Qara-atlas (Darayi, black color ones, used for older women clothing), Khoja’e-atlas (includes yellow, blue, purple colors; used for married women), Qizil-atlas (red color; used for girls) and Yarkant-atlas (Khan-atlas). Yarkant-atlas has more style; During Yarkant Khanate (16th century), it had ten different styles. 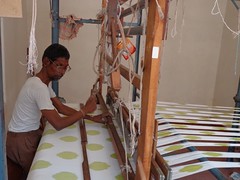 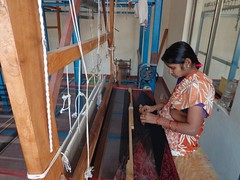 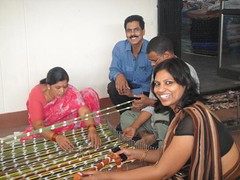 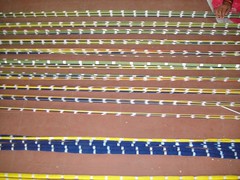 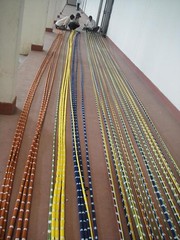 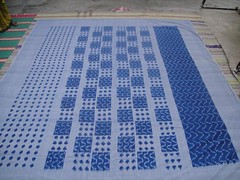 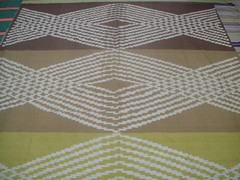 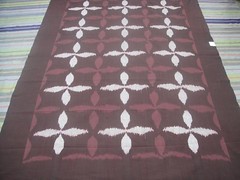 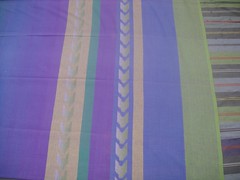 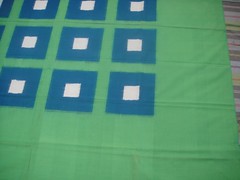 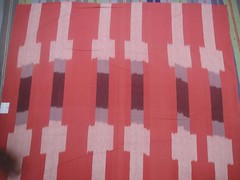 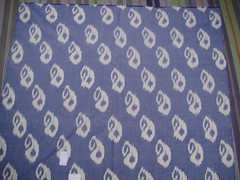 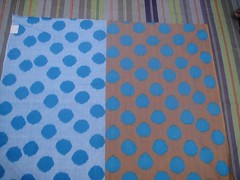 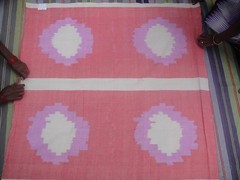 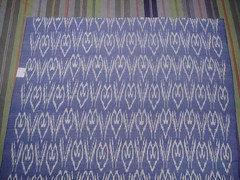 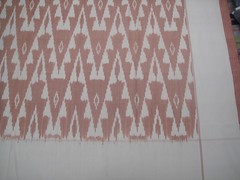 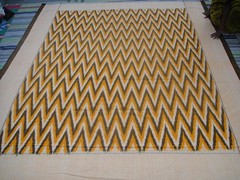 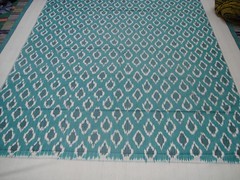 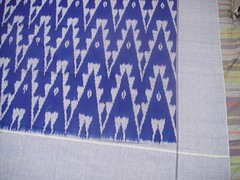 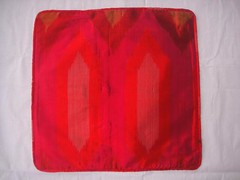 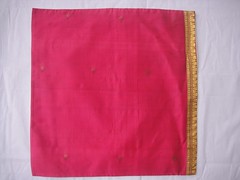 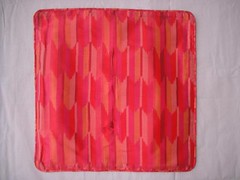